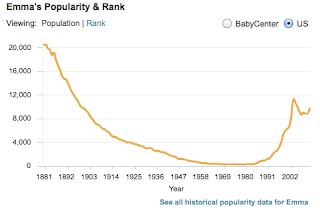 Check out this cool interactive site that gives a graph of the popularity of individual men's and women's names over time.

In the image above, I used "Emma" as an example.  By clicking the radio button for the U.S. data to the right of the chart you can see that naming your little snookums Emma was insanely popular in 1881.  After this it rapidly lost favor until a dismal nadir lasting from about 1961 to 1985.  Emma began a rapid climb after that, with a sharp upward spike in the 1990s.  Currently "Emma" has occupied one of the top three slots for girls' names for the last nine years, although hasn't quite regained its nineteenth-century popularity of 20,581 per million babies.

It may even be bobbling a bit - below the graphic, you can click to see all data on a name by year, again divided by Baby Center or U.S. data (scroll down), handily organized by namings per million babies.

In a lesson, you could ask your students what's wrong with this way of displaying the data (answer: is it clear that the measure of 1 million includes babies of both sexes?).

Time Sink Warning:  It's way more fascinating than you would think and I had to crowbar myself off the site.

Why am I jabbering about this in an education blog?  Because it's an awesome social history resource and a way of engaging students with statistics, change over time, culture, gender, and other juicy social science and humanities topics.

Give it a try and let me know how it worked out in your classroom!
Posted by Anne Pushkal at 10:18 AM