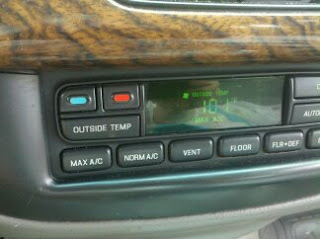 Just came across something I wrote at the end of school last year, and thought I'd post it in honor of the weather turning this weekend:


Going up the stairs in the morning we ascend into a damp cloud of still air, still stinking faintly of the hundreds of teenaged bodies that passed through the stairwell the day before.  Nothing on Junior Hallway has cooled off or aired out from yesterday.  The June heat wave left all of us wilted, the students whining and sweating in their polyester uniforms, the teachers cranky as we tried to force out the last lessons on the last Wednesday before finals.  I trudge up behind a great beast of a boy who sighs and moans as he feel the air press down, suffocating.  The hallway when we reach it is no better, and teenagers in flipflops and uniforms grumble as they change into their uniform shoes and stow bags and books in lockers, complaining about the heat.

In class I lay the ground rules.  “No whining about the you-know-what,” I say, gesturing toward the blazing light outside the window.  “Also, no touching the fan.  They are scientifically positioned for maximum air circulation."

This gets their attention, and a couple of boys and girls look around at the fans, checking to see if this might be true.
"I don’t want to hear anyone talking about the heat."  A couple of kids look defiant, but they're too hot to pursue it.   I continue: "The only thing I want to hear you talk about is ice cream, ice cubes, ice skating, ice hockey, or ice pops.  Cold mountain streams.  Baby pools.  Got it?”
They all groan.
“Why baby pools?” asks the nearest boy, sweating over his notebook.
“It just popped into my mind,” I answer.  I take attendence, and we try to finish up the Cold War and Korean War.  Nobody wants to, but we do it anyway.  It's June.
[June 9, 2011]