Visuals Can Change Everything

Reading the obituary of Apple founder Steve Jobs brought me back to the late 70s, when personal computers had blinking green or amber screens that consisted entirely of text, and commands were given in code.

In 1979 Jobs visited the Xerox research center in Palo Alto, "where he saw the Alto, an experimental personal computer system...that used a mouse pointing device [and] was one of the first computers to employ a graphical video display, which presented the user with a view of documents and programs, adopting the metaphor of an office desktop."
"'It was one of those sort of apocalyptic moments,' Mr. Jobs said of his visit...'I remember within 10 minutes of seeing the graphical user interface stuff, just knowing that every computer would work this way someday.  It was so obvious once you saw it.  It didn't require tremendous intellect.  It was so clear.'" 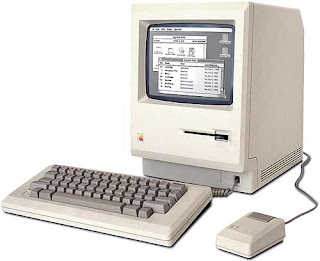 Jobs went on in 1981 to begin developing the Macintosh, which was released in January 1984 and introduced during the Super Bowl with a now-famous commercial "that linked I.B.M., by then the dominant PC maker, with Orwell's Big Brother."  The Mac, of course, was distinguished by the first commercial use of a graphical interface using icons, drag-and-drop, and other things we all take for granted now.
So the Mac distinguished itself and changed the computing world forever because of Jobs's attention to visual design - not just for aesthetics but because he understood the exponential difference visuals made in functionality. The graphical interface made it intuitive and made personal computing accessible.  Bill Gates later made his fortune by figuring out how to cloak the old DOS operating system in a graphical interface like that of Macintosh.  He called it "Windows."
Source of quotations - New York Times, Oct. 5, 2011
Posted by Anne Pushkal at 7:31 PM