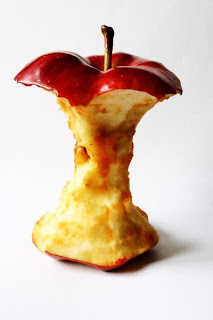 Poor Delicious! The once-awesome social bookmarking site had been going through some changes since its purchase by YouTube founders Chad Hurley and Steve Chen (AVOS), none very promising.  The latest debacle is the demise of their once-touted "Stacks" feature.  Don't ask me what it is - I never, ever figured out what Stacks were about the whole time I've been on New Delicious.  I even made a few stacks, and promptly forgot about them.  I couldn't divine what they were good for.
After it was purchased by AVOS it raised a firestorm of criticism as the owners essentially tried to repeat their success with YouTube by making it into some kind of playlist thing instead of the super social bookmarking tool that was its raison d'etre.  The idea was to make it more social (?).

They introduced the mysterious Stacks feature, along with a saccharine new slogan ("Discover Yourself!") which might as well have been cribbed from a yoga spa or maybe an especially chirpy junior college in the Carolinas.   Functionality suffered as Delicious was revamped and brought without warning back to beta.  Users couldn't get at their formerly easy-to-use custom keywords and do other things they were used to doing.  They vented on the web in a storm of virulent tantrums (yours truly among them) criticizing pretty much everything including the new blue-and-puke-green color scheme. (OK, this last was probably just me, but I really hated those colors.) It like New Coke on a smaller, geekier scale.

Competitor Diigo smelled blood in the water and offered enticingly easy bookmark migrating and thousands - or at least a whole lot of us-  jumped ship. (Indeed, if you click on the last link, you'll still see a prominent banner on Diigo's home page telling you how to migrate and leave Delicious in the dust.)
Stacks  were supposed to be some kind of playlist or web page of bookmarks or whatever.  I've used Delicious pretty much every day, even when I hated it, even during the dark days when I couldn't get my keywords back.  I stuck with Delicious even when I was at ISTE 2012 in San Diego and heard a talk by Coolcatteacher blogger Vicki Davis, who talked all kinds of unapologetic smack about Delicious (e.g., "They're unresponsive") and encouraged us all to try Diigo, where she's made her wildly popular moderated edtech bookmarking group's home.
Apparently my fellow diehard users were just as mystified about Stacks as I was, because Delicious has just announced that they're deep-sixing Stacks. I won't miss it, but for however many people tried to make it work, it's another inconvenience that's bound to ignite another shitstorm.
Tsk, tsk.
Posted by Anne Pushkal at 10:54 AM