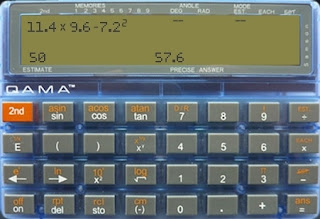 A calculator that won't give you the answer has me doing math for fun.

First, a confession:  I'm innumerate (well, OK, maybe semi-numerate) but I'm not proud of it, any more than you would be if you were illiterate.  A series of unfortunate or just plain indifferent educational experiences, punctuated by the occasional Year of Living Math Hell (you know who you are, Mrs. L and Sister A) left me stumbling through every math occasion like a carny at a coronation.  The "A's" and "B's" I got were achieved by sheer terror and memorization, the half-grasped concepts rapidly forgotten like so much vermicelli in the drain basket.

By the time math started to get challenging, right around the second half of Algebra I, I couldn't sustain even that and got the first C of my life.  Next year was even worse- D in Algebra II and Trigonometry - and I gave up.  I got put in Calculus in college with predictable results, so I never took a math class again.

Years later, to prepare for the GREs, I taught myself what I needed and passed with a respectable score.  That's when I started to have an inkling that maybe I wasn't stupid in one part of my brain. Maybe I could learn math, and I hadn't had the right teacher.   I continued teaching myself, performing well as I moved on to jobs where I had to handle large budgets, work in Excel, perform estimates and projections and so on.

But it wasn't fun.  I always felt anxious.  I checked and double-checked and triple-checked my work.  I did a good job, but there was no pleasure in it.

So when I saw the QAMA Calculator, which won't give you the answer unless you first give it a reasonable estimate, I hoped it would force me to develop that facility with numbers, the feel for them that I've noticed and envied in my math-adept friends.   I ordered it.  Immediately.

Ripping open the package a few days later, I was a little daunted by the instructions, but I jumped in and tried a few triple-digit multiplication problems.  As promised, I couldn't get it to give up the goods (the product, for all you smug math mavens) until I thought and thought some more and came up with an estimate close to the real answer.  Then voila! the answer appeared.

This is major:  I can't tell you the sense of triumph and affirmation I felt when I finally got it right.  I tried another one, and another.  A lifelong math avoider, suddenly I WAS DOING MATH FOR FUN!  Do you understand what this means?  In a matter of minutes the QAMA had me challenging myself for the pure game of it.

The QAMA website warns that you have to use it all the time for it to work - that every child in a classroom should be given their own calculator so they estimate EVERY time they do math.  It won't help build that wonderful fluency with numbers if you make them share or only trot it out occasionally.  This makes sense.

But still - for me to actually look forward to doing bills and estimates because I get to use the QAMA is nothing short of miraculous.  I'm starting to get cocky.  I'm bandying numbers about, striding around, standing a little taller.  I'm tossing them off like there's nothing to it.  I'm starting to get it.

What if the QAMA was in every classroom?  Do you think it would be a game-changer?
Posted by Anne Pushkal at 10:38 AM