Roots of the term Andragogy in the U.S. 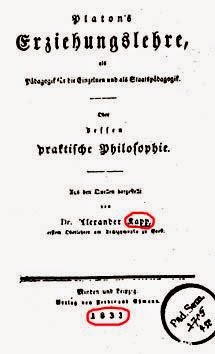 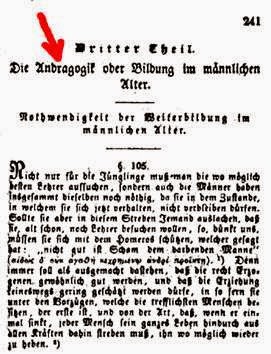 (images from Andragogy.net)
Researching the history of the concept of andragogy, or principles of adult education, for an assignment for a course in Adult Education I'm taking in the MAIT program at Richard Stockton College of NJ,  I came across the German website Andragogy.net, which published images of what may be the first use of the term, in 1833 by the German teacher Alexander Kapp, whose book Platon’s Erziehungslehre (Plato’s Educational Ideas) I have reproduced above.

I wanted to try to trace the use of the term in English and go into a little more detail than our assignment requires here in this blog.  Remarkably, "andragogy" does not appear in the Oxford English Dictionary, although it has been in use in print in English at least since 1968 and became more widely known in 1970 with the publication of Knowles's The Modern Practice of Adult Education: Andragogy vs. Pedagogy (New York: Association Press).

Digging a bit further, the earliest work I was able to find by Knowles is his 1950 Informal Adult Education; A Guide for Administrators, Leaders, and Teachers (Association Press), which is available online.  An electronic search of the text shows that Knowles appears not to have used the term in his 1950 publication.  However, according to Jost Reichmann, creator of the Andragogy.net website, Knowles himself recounts how he met Yugoslavian educator Dusan Savicevic at a conference in 1967.  Savicevic introduced Knowles to the term, and according to Reichmann, Knowles first published the term in his 1968 article, "Andragogy vs. Pedagogy."  We can learn more about the development of Knowles's thought in his 1989 autobiography, The Making of an Adult Educator:  An Autobiographical Journey (Jossey-Bass).

In any case, according to Reichmann, the term first appeared in German in 1833, reappeared in Germany in the 1920s, and then again in the 1950s in Switzerland, Yugoslavia, the Netherlands, and Germany before Knowles spread its use in the English-speaking world.
Posted by Anne Pushkal at 1:51 PM