We had our second class tonight.  Have to catch up on most of it via Wimba but I'm entranced with what we did.  I especially like Poll Everywhere, which, in a nutshell, is like a clicker system to get answers to a question from multiple people (polling) only there are no clickers - you just create a poll on the web and have your respondents text their answers to a unique number that polleverywhere generates.  The responses appear on the web in real time.  Classmates explained that you can do this with a large audience -  have the audience answer, and project the results on to a screen in realtime and let them watch it change.  Awesome! How much would parents like that on parents' night?

I also had a look at Wordle and Tagxedo, two sites that create clouds of words with text you provide.  Mostly people talked about using it for the younger grades, but I wonder if I could get my high school history students to dump their notes into it to generate vocabulary terms or an unusual study guide.  Wait, how about a project - dump notes into Tagxedo and use its shape function to form them into a history-related shape (like a flintlock rifle or a covered wagon or a guillotine.  OK, maybe not a guillotine).  Maybe make a Ben-Franklin-shaped word cloud out of text from Poor Richard's Almanac.  Hmmm.  Have to think about this.  Can we get it on the school's lab computers, or will it crash and burn having to download silverline or whatever that was that delayed us tonight?  Test in lab first, I think. 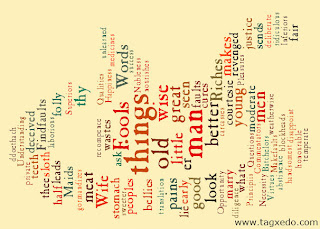 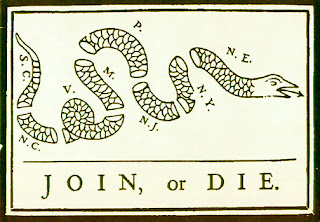 OK, here's my Poor Richard's Almanac word cloud, above.  I chose a snake because I haven't figured out how to make it look like Ben Franklin yet.  This reminds me of the flag Ben published in the Pennsylvania Gazette, "Join or Die"(1754)
Posted by Anne Pushkal at 7:37 PM